Once you’ve covered some of the basics, here are a few PRODUCTION tips that will get you up to speed fast and prevent mistakes. We’ll concentrate on how to do this in Audacity (download here), but these tips are useful for any digital audio editing software, system or workflow. (This assumes you have some familiarity with the basics of Audacity and your computer.

1. The Magic of Changing Tempo

If you want to end music or a sound effect a bit later or sooner, simply choose Effect > Change Tempo to shorten or lengthen the music! Small changes will NOT sound noticeably different, it will just make whatever audio you selected shorter or longer. Settings let you shorten or lengthen audio by a selected percentage without changing pitch.  Do NOT use the Change Speed.. effect. This WILL change pitch and make things sound strange.

While you should rarely change the length of voice audio, a smooth voice with good diction can be sped up or slowed down as much as 15% or more without making the voice sound strange. Most music and sound effects can handle even greater changes while leaving them sounding essentially the same.

Change Pitch is a useful effect in altering sound effects (SFX). SFX generally means sound that isn’t voice or music. For example, coffee pouring into a ceramic cup sounds strangely high-pitched to most ears. Simply lower the pitch of the “coffee pouring” audio for a sound that sounds more normal.

2. Use Effect > Bass and Treble to Control the Mix

Select some audio to play, and hold down the Shift key on the keyboard while clicking play to play on repeat over and over. Then click Effect > Bass and Treble… and adjust the sound while it plays. This is a great trick to help find the right blend between music and voice. Of course, you don’t want to change things too much, as you don’t want to misrepresent the voice over recording.

A common example is to increase the treble in a voice over track to help it “cut” through the music a bit. It makes some voice/music combinations seem to highlight the voice more, to make the voice more “present.” Instead of or in addition to changing volume at key spots to help the music and voice blend more to your liking, you can also apply Bass and Treble… to either or both the music and voice.

As you get older, you will hear higher pitches less, so older ears should adjust the equalizer in your computer’s audio settings (not in Audacity or on your mixer) so that you don’t increase pitch too much in your mix. Start by testing your hearing here.

However, if what you really want is to change the pitch of music or a sound effect, use Effect > Change Pitch… 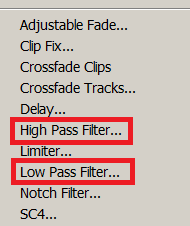 When a voice talent “explodes” a bit too much on a “p” sound we call it a “plosive.” The rumbling sound of the air popping out from a particularly explosive “p” is a low frequency sound. To remove some of the low frequency sound, you can choose to pass through mainly higher frequency sounds. Think of “High Pass” as reducing low-pitched sounds. Scroll down near the bottom of the Effect menu to find this effect.

Similarly, if you have hissing “s” sound, you’ll want to try getting rid of some of the high frequency hissing. Select the audio and use Low Pass Filter… (think of it as reducing high-pitched sounds).

A low-pitched thump on the mic stand could be masked with High Pass Filter to reduce the low frequency “thump” sound. Just select the thump and apply High Pass.

High and Low pass will change the sound of whatever audio they modify, so listen carefully to the result and use less if needed. And don’t try to eliminate problems like hiss or rumbling if they are all throughout the audio. These effects are best just for touching up small moments of problem audio.

These are guidelines. But remember, a voice-over demo is NOT a production itself! It must seem simply like clips from actual commercials. ►Read Commercial Demos: The Rules before actually mixing music for demos. The main rule is do NOT have music before or after the voice unless less than two-tenths of a second. The voice should be the star, not the production or the music.

Which part of the music should you use?

At any point, remember you can change the music tempo (see step #3 above) if you want to match the ending up more appropriately with the voice. When starting, try these options in this order:

By default, try starting and ending music at the same time as voice. Try it first with NO fade in or out on the music, or a less than two-tenths of a second fade in/out, i.e. abrupt.

Beginning of Track: For a longer initial music fade-in, start at 25%-75% of volume, and fade in for a second or more.

End of Track: End music before voice, generally, so last thing heard is voice, e.g. ends music just before or during the last syllable, so the (very brief) last sound is the voice.

Use Effect > Change Tempo but made as short as possible without “weirding” out the voice. Typically 8-19% faster.
One where music fades after voice. This sometimes sounds best if listening to the track on its own (though not always, sometimes ending the music first sounds best).

There is an entire suite of tools and tips for Audacity here to work with.

Bonus: Complete Control of Amplitude in the Mix

The envelope tool in Audacity  takes some getting used to, but it allows you complete control of the amplitude of any track at any location. Here’s a short video introduction to how to use it and what it can do:

Workflow just means the steps and procedures you follow when working. This assumes you are using Audacity, but holds true for other software as well. (“DAW” means digital audio workstation, and usually just means the collection of equipment and software you are using.)

Be sure you have read the rules of commercial demos before beginning.

Edit a bit when you record. Particularly, delete things you know you won’t be using later, such as conversations between a talent and an engineer. Make sure you make the script easy to find and access later when you are creating your demo clips.

When you choose which takes you prefer to try out as commercial demo clips, be sure to specify the exact time to avoid errors later, such as :05.5–:11.2

If you have several different scripts recorded, you should save them all in one project. Then, when you begin editing, put all the takes from one script you want to experiment with into a single project.

Initially, you should probably get all your takes onto one track with the project, then duplicate that track. Name one of the duplicate tracks something like  “source takes from script #1” and name the other track “first edits”, or “edit #1” or simply “#1”. Then do NOT edit the track named “source…” ONLY edit the copy of that track. As you make more edits, you may simply want to duplicate the “first edits” track, and name the duplicate “second edits” and make further edits to that.

This way you never lose any of your previous work and can go back to it if you:

If you are creating more than one clip, work on each clip just enough to get a sense of what is good and what is problematic about each. In other words, get an overview before working on any one clip. Make notes about such things as initial length, ease of editing to shorter lengths, style.

Do NOT try to adjust or fix things before deciding what you probably use. You want to limit the amount of work, and avoid working on something that you end up not using.