How important is improv for commercial voiceover, not just animation? Sure, virtually all actors with formal training nowadays have improv training and experience.  For example, Casting Director Carloynne Barry says that improvisation “helps actors get more commercial auditions and is truly a major asset in doing better at their auditions.” But for voiceover?

“No voice talent can be considered [for certain sessions] who is is not good at improv.” –Award-winning VO casting director Terry Berland

Katie McCollow, the branded national voice of a State Farm nationally in the U.S. recently became the voice of an important campaign for another major national U.S. company. In a panel discussion I invited her to join me on, she described what happened:

“In the session, they wanted a lot of improv voices. Now, when I talk to my kids, we never use our own voices—we are always doing improv. That would be annoying for some people, but we love it! So I ended up doing the voice of Count Chocula! They said they loved my audition and booked me for the national campaign, even though they didn’t want that particular voice.”

Voiceover rosters are full of talent with experience in improv, comic acting and standup comedy. If you don’t have some improv experience listed on your resume, it looks strange, because a lot of commercial voice over is considered closer to improv than any other kind of performance. You have to make what you say sound “made up” and “fresh” (what actors call “discovery” as compared to reading or reciting). Comic and voice actor John Dimaggio is a great example: 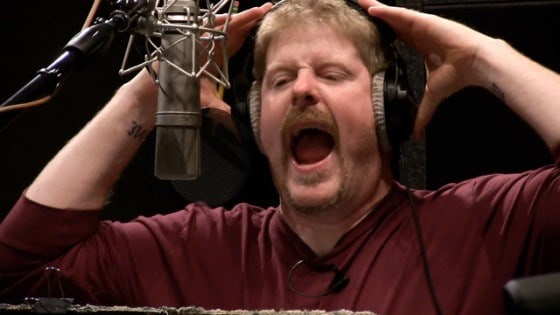 One great LA voiceover coach I know suggests that the best way to make the boldly specific choices casting directors are looking for is to practice breaking the rules, always being able to do something they would never, ever use that is over the top and waay “outside the box.”

VO Coach and top talent Pat Fraley says “Of the nine critical skills of voice over, improvisation is the most underused AND the most misused.” He explains that voice talent misuse improv when they “try to be funny” instead of “using humor (as opposed to “comedy”) to emotionally connect the audience or listener with an experience”

“I recently got an audition that said right on it ‘Must have improv experience to audition’.” –Gene Randol, School of Voiceover graduate

In the American Academy of Voice Acting system, improv is considered the core of “what you do for the actor”, the actor being the first of the three people you must cultivate and develop in every performance (the other two are the character, and the listener).

At the Voice Acting Expo, we start the day with easy improv, followed by dialog spots, so you learn how as an actor to feel loose about receiving direction, then make it sound like you are talking with a listener. We want to make sure it is on your resume, but mainly it is there to make sure you get the most out of the all-day training by experiencing how to keep yourself loose.

Conveying how you feel about those facts you are accurately reading is what wins: The left brain keeps you accurate and logical, but that loose cannon right brain–emotional, aesthetic, subjective–has to take over for you win the audition, and win over the producer and client in the paying session. You will be endlessly asked in a thousand different ways to bring more life to a script. Improv skills and the loose performance comfort they help actors find are essential to finding ways to bring more life to your next voice over performance.

“Voice talent need to commit to the choices we make, which can be hard. [Improv helped] me gain confidence doing it.” –Anthony Piselli, voice of CBS Asia.

Award-winning casting director Terry Berland points to several times improv is essential in voiceover: “No one can be considered for ADR/looping who is is not good at improv. ADR and Looping have many opportunities that are not scripted and you have to come up with conversations quickly to match the feel of the scene in the background of the film or TV show. Also, there are times your voice has to come between other visuals or music in the script. Your voice coming in once between other actions, visuals, or music is called a donut (one hole), and several times is called a pretzel. You have to react very quickly to the last sound or visual prompt, and the director can very well tell you to change your attitude in the words you are fitting into the allotted spaces. You’ll be happy you can only rely on your well-trained improv muscle in these situations.”

What Voice Talent Say About Improv

“[Improv helps you] create more vivid circumstances and more variety in possible circumstances. For VO sessions with producers and clients, it’s practice receiving a variety of direction and need to act immediately. For games and character VO work, even audiobooks, improvisation supports expansion of current character/accents and development of new ones.” –Voice Talent and Coach Rebecca Haugh

Comments from voice talent that got agents after their School of Voiceover training:

“The other actor for a dialog spot session came in and was so far over-the-top on the first take all everyone could do was laugh! It really set the “fun improv” tone that I’ve learned producers like.”

“In the studio during the session, I was improvising a quirky lead-in before doing the spot, and the producer played my read-in back for the client, just so everyone could have a laugh. Sometimes voiceover feels like being the entertainment at a party.”

“My voiceover frankly sucked until I started taking improv classes. I didn’t realize how challenging it could be to make the ‘boldly specific’ choices good voiceover demands.”

“I was paid to do the voice of a Unicorn vomiting up a horse. I needed to do a lot of improv to get the physical feeling that led to the sound they liked.”

“I have NEVER had a session where improv skills didn’t save my butt. From being loose enough to accept and try some of the odder things directors suggest, to coming in and no longer needing the producers to help me get and stay loose.”

“I thought I was ready to be a working voice talent because I could do funny voices. Boy was I wrong! My voices had no real life to them. Improv really opened the door to how to characters in animation for me.”